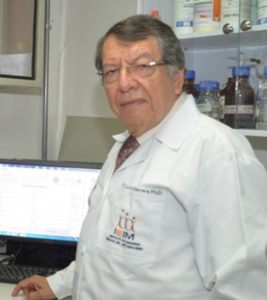 Luis Alejandro Barrera has a Bachelor of Science; a Master degree in clinical biochemistry from SUNY at Buffalo and a Ph.D. in Biochemistry of University of Miami. He has been founder of two centers working on Inborn Errors of Metabolism (IEM) in Colombia, The Center for Biochemical Research in Los Andes University and the Institute for the Study of Inborn Errors of Metabolism in Javeriana University. He has also been founder of The Clinic of Inborn Errors of Metabolism in San Ignacio Hospital in Bogotá. A permanent campaigner in defense of the rare diseases patient´s rights, proponent and defender of the Law in favor of rare diseases, founder of two patient organizations. He has been one of the front leaders in education, research and diagnoses of IEM in Colombia, his main interests in research has been the diagnoses, epidemiology and Molecular characterization of IEM in Colombia, the construction of adeno associated vectors for gene therapy assays of Morquio and Hunter diseases, the expression of recombinant enzymes in yeast and bacteria to be used in enzyme replacement therapy of lysosomal storage diseases. He has been cofounder and twice President of the Latin American Society of Inborn Errors of Metabolism and Newborn Screening.

This site uses Akismet to reduce spam. Learn how your comment data is processed.