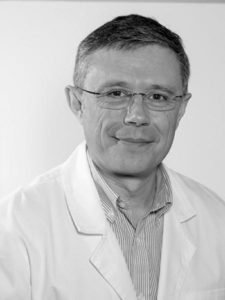 Joan X. Comella received his PhD in Medicine from the University of Barcelona in 1989. After a post-doctoral position at CNRS in France, he was appointed Full Professor in 2002.

Apart from relevant positions in several Spanish research agencies such as ANEP (Director 2004-2005), FCYT (General Director 2005-2006) and FCRI (General Director 2007-2009), he has been a consultant and evaluator of the EC in the Framework Program V, evaluator of the National Research Program of Argentina and France, member of the Scientific Committee of MIHealth, Chair (2012-2014) and actual co-Chair of the Board of Directors of EATRIS.

He has served as External Advisory Expert of the EC on “ageing population” program and member of the Ad Hoc High Level Expert Group for Chronic and Degenerative Diseases, Genomics and Neurosciences of the EC (both held 1999-2002). He has received several awards including the National Prize of Basic Medical Sciences of the Pfizer  Foundation (2005).

He has led more than 25 research projects, supervised 19 doctoral theses and co-authored over 100 publications. He leads the “Cell Signalling and Apoptosis” group since 1990 which works on the study of death receptors and their relationship to neurodegenerative diseases, particularly chronic diseases (Alzheimer), or cancer (notably neuroblastoma).